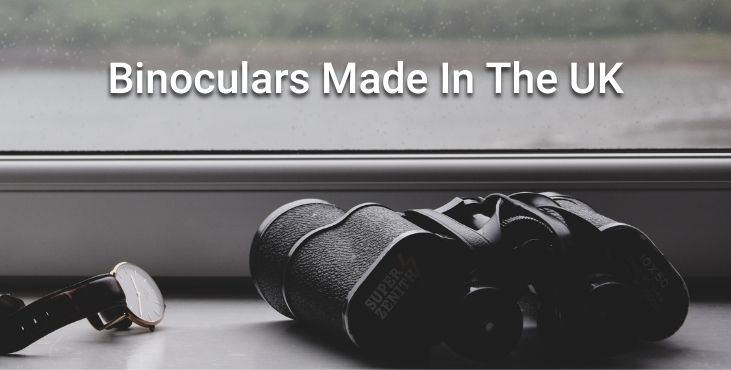 There are numerous binocular brands available nowadays, but are any of them made in the UK? Go back around 90 to 100 years ago or even 70 years ago and the British binocular industry was booming. Companies like Ross, Barr & Stroud and Wray were well known binocular makers.

Now, if you stopped a random stranger in the street and asked them to name a brand of binoculars, there’s a high chance they wouldn’t be from the UK. Let’s start by looking at some of the old tried and trusted companies from yesteryear and see if any of them, or any other UK based binocular manufacturers exist.

From what information we can gather, the development of the forerunner to binoculars, the telescope was greatly improved upon due to the results of the Industrial Revolution in England.

Brass is an alloy of copper and zinc and had been made in some form or another for centuries but the technology wasn’t available to create the precise brass tubing necessary for telescopes until after the industrial revolution. Many of the early examples of brass telescopes were of British design and manufacture.

During the war years all UK binocular manufacturers only made binoculars for the military, in fact during WWI there was an appeal from Lord Roberts asking the general public to lend their binoculars or field glasses to the army. Apparently the request stated that “ every good glass (except opera-glasses) and every telescope (except toys) is wanted for the service of the country”. Upwards of 26,000 pairs of varying quality were received by the military from the Great British public.

Following the cessation of hostilities in 1945 the binocular makers started to produce updated models of their pre war optics. Many incorporated coated lenses, a technique copied from American and German binoculars. During this period binoculars were considered to be an important part of the UK’s export drive. The Britain can make it exhibition of 1946 included the CF18 binoculars by Barr & Stroud. Interestingly these binoculars were of the same design first introduced by the company in 1929.

As many of their competitors like Zeiss found themselves with problems in production (due to them now being part of the Eastern bloc) British binocular manufacturers experienced something of a boost in sales. Companies like Ross, Kershaw, Barr & Stroud and Wray continued to concentrate on high end top quality precision optics, with top prices to accompany their products.

During the 50s and 60s binoculars were an expensive commodity with less than one percent of British families owning a pair. Whereas 20% had cameras and telephones and 75% had television sets. Companies like Wray and Ross did attempt to open the market up by introducing cheaper products in the late 50s. For instance the Solaross which was priced at £20.00 came complete with a luxury velvet-lined leather case and many lightweight plastic parts.

These were considerably less expensive than many of their other models (thanks to the use of plastic parts) and were aimed at the lower end of the market. These lower priced binoculars were competing against their own brand higher quality products that were being sold as army surplus. One retailer stocked ex-military Ross 7×50 binoculars for between £16.00 to £21.00 and the same binoculars made for the civilian market at £55.00.

During the 60s it seems the correct price level for British binoculars was around the £20.00 mark. Many British holiday makers were travelling further afield and wanted a reasonably priced pair of binoculars. £20.00 was out of reach to many British tourists, then in 1965 the UK government removed import restrictions on Japanese binoculars. By 1966 Japanese quality binoculars were being sold in the UK for under £18.00, as 1970 approached names like Pentax, Canon, Tasco, Yashica and Swift were well known to British binocular buyers.

The End Of The British Binocular Heyday

These cheaper Japanese imports meant the end of the British binocular manufacturers as they soon began to cease trading. In 1971 Barr & Stroud ceased producing binoculars, as did Wray in the same year. In 1975 Ross finally closed their factory. These iconic names in British binoculars stopped trading because they never moved with the times. Instead of compromising on quality, they chose to continue until they couldn’t afford to any more.

British made binoculars from the 50s and 60s are still available online on marketplace style sites at very reasonable prices. Many are as good quality as they were when they were made 50 to 60 years ago.

There are modern day companies that still work in the UK and manufacture or market binoculars. One such company is Opticron.

Founded in 1970 Opticron based in Bedfordshire were one of the first companies (not including the European big 3) to launch a roof prism binocular with a 2 metre close focus in 1995. Their latest product is the Opticron Imagic IS 10×30 Image Stabilised Monocular. Although branded as British, as far as we can find out, most of Opticron binoculars are actually manufactured in Japan with some being made in China.

Hawke Optics began life over 40 years ago in a garage and since then, have become a world leader in sports optics. Hawke Optics headquarters are in Woodbridge Suffolk UK but have bases in over 60 countries worldwide. They produce high end quality optics at very affordable prices. But as with Opticron, their binoculars are manufactured under strict specification control in China.

Avalon Optics began trading in 2019 in Lancashire UK. They produce good quality, reasonably priced binoculars that after a quick internet search appear to be based in the UK, Australia and the USA. After more research we seem to have discovered that Avalon Optics are actually made in the far East.

Viking Optical Limited Started life as Startserve Limited in 1985, later that same year they changed their name to Viking Optical. Based in Halesworth Suffolk, Viking markets all manner of optical equipment including; Binoculars, scopes, monoculars, and magnifiers. They supply the RSPB with their range of binoculars, designed and supplied by Viking Optical.

Like many binocular suppliers in Great Britain, Viking is not the original equipment manufacturer. It seems their optics are produced in China and Japan, with their higher quality models coming from Japanese producers.

Are There Any Binoculars Made In The UK?

After doing our research, it seems there are no binoculars currently made in the UK. Many companies based in the UK import binoculars from the far East and market them from here. There is nothing underhand or illegal in this but it’s not too helpful when trying to find genuine Great British made binoculars. It seems the only way to find any true UK made binoculars would be to buy an antique pair from the 40s, 50s, or 60s.